The Toronto Skyline as seen from the Toronto Islands, Photo by Vincent Yi Zhang

T.O., T-Dot, Hogtown, The Queen City, Toronto the Good, The City Within a Park, Hollywood North

Toronto, derived from the Huron word for fishing weir, is on the northwest shore of Lake Ontario. Boasting a metro population of 25.9 million, Toronto is the 5th largest city in North America and one of the most multicultural cities in the world. With over 140 languages and dialects spoken, Toronto is a mosaic of diversity. Toronto is Ontario’s capital city and Canada’s financial and business capital. With 138 km of shoreline along lake Ontario, bays and islands as well as 307 km of rivers and creeks running through the city, Toronto’s natural beauty is not to be overlooked.

25 municipalities make up the Greater Toronto Area, including the cities of Toronto, Brampton, Burlington, Markham, Mississauga, Oshawa, Pickering, and Vaughan; the towns of Ajax, Aurora, Caledon, East Gwillimbury, Georgina, Halton Hills, Milton, Newmarket, Oakville, Richmond Hill, and Whitby; the townships of Brock, King, Scugog, and Uxbridge; and the municipalities of Clarington and Whitchurch-Stouffville.

There are over 2.7 million people living in the city of Toronto, and over 1.1 million homes, making it one of Canada's densest cities. The tenth most economically powerful city in the world and one of the fastest growing, Toronto's economic base includes finance, telecommunications, aerospace, media and the arts, publishing, I.T. industries, medical research, and engineering sectors among many others. 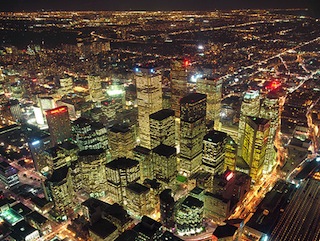 Downtown from the CN Tower, Photo by City of Toronto 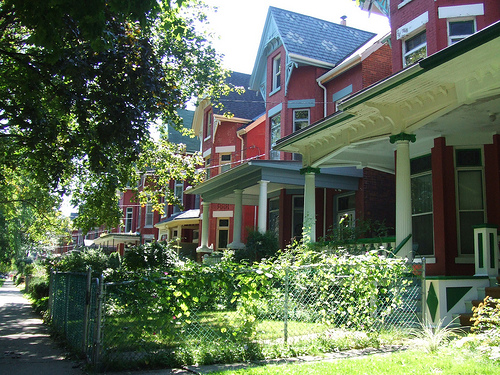 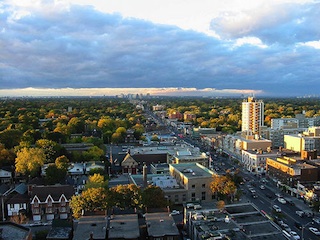 Midtown Toronto from Above, Photo by Elango

In 1996, Toronto became known as the GTA (Greater Toronto Area) incorporating the municipalities of York, East York, North York, Etobicoke and Scarborough. When referring to Toronto before amalgamation, people often refer to it as "Toronto Proper" or "Old Toronto". Currently, Toronto is affectionately known as "the T-Dot".

The city of Toronto is an eclectic mix of ethnic and exciting pockets, divided into the West End, East End, Midtown (formerly North Toronto), North York and Downtown. Yonge Street is the East and West division, Bloor Street the North and South division. North of Bloor lies Midtown and North York, South of Bloor is Downtown. East of Yonge is the East End, East York and Scarborough. West of Yonge is the West End and Etobicoke.

Toronto’s East End is a hub of cultural diversity. Greektown, Little India, Little Ethiopia and Danforth Village are all ethnically integrated, creating a community both unique and full of flavour... literally. The food in the East End of Toronto is authentic and amazing. Don’t judge a book by its cover: it may not look fancy on the outside but for a true taste of Toronto's diversity, the East End can't be beat.

Is this your first time in Toronto and the Greater Toronto Area? Check out these sites before you visit us!

Keep up on current news and events in Toronto by tuning into one of our local media stations.

In addition to six school boards, Toronto is home to a wide range of private school options as well as world-class post secondary institutions, including the University of Toronto, York University, and the Ontario College of Art and Design.

Want to know which pro sports teams most people in Toronto cheer for? Check out our favourites below!

There is no lack of shopping in Toronto. From vintage to haute couture, Toronto has got absolutely whatever you’re after. 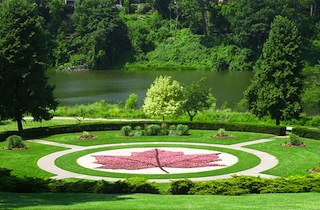 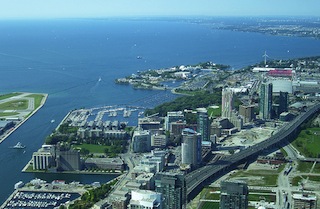 Toronto is a sprawling landscape where man made meets natural beauty. With thousands of parks, parkettes and sloping ravines, Toronto is a city suited for both the urban and outdoorsy types. There are hundreds of municipal parks, three Provincial Parks and two National Parks in the area. For those who prefer two wheels, Toronto has an impressive network of cycling trails, reaching from Scarborough (East End) through the city, and all the way to Etobicoke (West End): Torontonians are avid cyclists, battling traffic and the elements all year round.

While there are hundreds of smaller local neighbourhood and community parks, some of Toronto's most loved featured parks include the Toronto Islands, Music Garden, Village of Yorkville Park, High Park, Riverdale Farm, Guildwood Park, Bluffers Park, Rouge Beach Park, HTO Park, Downsview and Humber Bay Butterfly Habitat. Many of these parks host one or more of Toronto's yearly events and festivals.

Situated on the Northwestern Shore of Lake Ontario, Toronto boasts stunning beaches enjoyed by residents and visitors alike. Toronto’s waterfront is a continual work in progress and has become a prime destination for families looking for a day out and an inexpensive way to cool off. Yes, it’s true; Lake Ontario is swimmable and safe! The majority of our lakefront swimming areas have received the Blue Flag eco-label, an internationally recognized designation that takes into account a host of environmental factors. Now whether the temperature of the water is swimmable, is entirely up to your threshold for cold, but on a hot and humid Toronto day, nothing beats a nice icy dip. Some beaches of note include Woodbine/Kew/Balmy Beach, Hanlans Point (nude friendly), Sunnyside, Cherry Beach, Sugar Beach and Bluffer’s Park.

With hundreds of community parks and some of the region's most beautiful feature parks and beaches, there's plenty for outdoor enthusiasts to love about Toronto, whether it's exploring the Islands or relaxing in the sunshine at Bluffer's Park.

Toronto features some significant and very cool architecture and landmarks, including the massive CN Tower!

One of greatest things about Toronto is being close to the beautiful waterfront of Lake Ontario.

There are plenty of ways to keep fit and have fun in the city of Toronto. From local community pools and facilities to major sports and recreation venues, your family can stay active throughout the year. Check out what playgrounds, pools and rinks are near you. 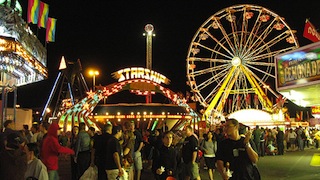 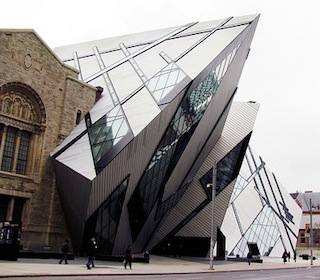 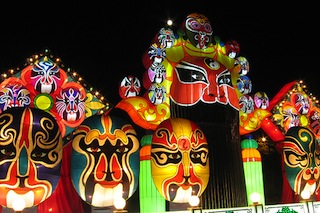 Toronto is a melting pot of all things cultural. With such an ethnically diverse population Toronto has just about everything you can think of. From large festivals like Caribbana to smaller neighbourhood festivals like The Taste of The Danforth, you’ll be pretty hard pressed to be bored in Toronto. A city of many museums, theatres, festivals and sports activities, Toronto is truly a world-class city.

If it’s art and history you’re after, there’s the Royal Ontario Museum (ROM) and the Art Gallery of Ontario (AGO), one of North America’s largest. Go to The Distillery District and The Power Plant for something a little more low key. We even have a castle! Casa Loma, built by Sir Henry Mill Pellatt is guaranteed to surprise and impress you.

There is no lack of theatre in Toronto with venues dotted all over the city. Independent or mainstream, there is a show for all tastes. The Mirvish theatre company is one of the most well known and popular within the city, and regularly puts on massive broadway-style shows, while those looking for smaller companies with a more eclectic season will love Soulpepper Theatre and the Red One Collective. Toronto is also home to the Canadian Stage Company, the largest not-for-profit contemporary theatre company in the country, which creates some truly unique cross-disciplinary shows. And for lovers of classical dance and theatre, Toronto is home to the National Ballet of Canada and the Canadian Opera Company.

Toronto also has a vibrant musical community, hosting major musical acts and festivals all year round including the NXNE (North by NorthEast) and CMW (Canadian Music Week). As a major stop for almost every tour that runs through North America, concert aficionados will love the wide range of musical venues available in Toronto, from small, intimate spaces to massive stadium-sized musical extravaganzas.

Festivals are always happening in Toronto, and there’s rarely a weekend when you can’t find some kind of festival or special event taking place in the city. Festivals that are growing in popularity include Luminato, Nuit Blanche, and of course the globally know Toronto International Film Festival. Toronto is also home to one of the biggest Gay Pride Parades in the world, and the largest in Canada, attracting over one million people to the gay village in Church and Wellesley area. For the foodies, Toronto offers the Summerlicious and Winterlicious food festivals, along with dozens of neighbourhood festivals celebrating our ethnically diverse cuisine.

At its heart, Toronto is a multicultural city, home to a diverse population with varied traditions, cultures and cuisines. Experience Toronto's incredible diversity at one of our fantastic local cultural festivals: here are just a few of our favourites!

Toronto is renown for its International Film Festival, and offers a host of other amazing film fests for all tastes.

Don't forget these favourite festivals and major events that take place in Toronto every year, including the beloved Santa Claus Parade, Canada's largest Pride Week, and the Winterlicious/Summerlicious food festivals!

From Broadway-sized mainstage shows and opera to small, intimate venues, Toronto is home to some great live theatre.

Love history and art? Toronto is proud of its heritage and has some world-class museums and art galleries.

The data included on this website is deemed to be reliable, but is not guaranteed to be accurate by the Toronto Real Estate Board.